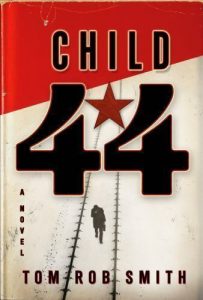 I’ve recently been reading a book by a very successful commercial author.  It’s a mystery/suspense novel.  And, well, it passes the time.  It doesn’t pull me in, doesn’t make me believe the characters are more than anything than walking names who say words (and they don’t particularly talk like actual people).  Sadly, the world of this book, which shall remain unnamed, doesn’t make me believe in its world, and it is the world in which we all live.

Thinking of all those things, I want to suggest a book that is the complete opposite, an authentic novel which lives and breathes.  So, for the deep, cold winter which currently grips us (or most of us), I suggest you read one of my favorite books:  Child 44.

Leo Demidov is an MGB officer. The MGB is the Soviet secret police. He has clawed his way to a high position by adhering to the communist party rules of the 1950’s Soviet Union.  The State thinks for him and makes every decision for him and his wife, Raisa, a school teacher.  As a celebrated hero of the Great Patriotic War, he has a certain amount of respect, and that respect has created envy in some of his colleagues.

Being loyal to the State has provided Leo, his wife, and his parents with a life that is modestly comfortable compared to their fellow citizens.  Leo lives and breathes for the Party, but his loyalty is tested by two matters.

First,  the Party hinders Leo’s investigation when he is ordered to cover up the most recent victim of a series of child murders.  He is forced to tell, and convince, the parents (the dad is an MGB officer as well) that their son’s death was an accident.  Things like murder, not to say anything of serial murder, do not happen in the Soviet Union.

Second,  his loyalty to the State is further tested when a tortured prisoner names Raisa as a traitor.  The prisoner was “interrogated” by one of Leo’s envious underlings.  when Leo refuses to denounce his wife, he is demoted and sent to the other end of the country as punishment.  Likewise, his parents are stripped of their adequate accommodations and forced to live in an apartment with several other families.

From the fringes of society, Leo and Raisa must work their way back to Moscow to stop a killer who has a keen interest in Leo and his past childhood.

Child 44 was the debut novel of author Tom Rob Smith.  He more than deserved every accolade and award it earned him.  The research that went into this book is miraculous.  Yes, it is a fine-tuned thriller, but it is also a gut-wrenching, fully immersive experience.  It will educate you about life under Stalin’s boot.

Smith took inspiration from the case of Andrei Chikatilo for his book.  Chikatilo was a serial killer who operated in the ’80’s era Soviet Union.  Smith set his story three decades prior, but the same maligned rules of the State still applied.  As a Communist Party member, Chikatilo was erased from the suspect to list to continue his reign of terror until the fall of the USSR.

With Child 44, Smith wrote a stark symphony of paranoia, suspense, and heartache.  How all of its threads come together is masterful– the ending is brilliant.  For whatever inane reason, the film adaptation changed it, which was just one of the its many flaws.  The movie may be a stink bomb, but the book is one of the best thrillers on the shelf.