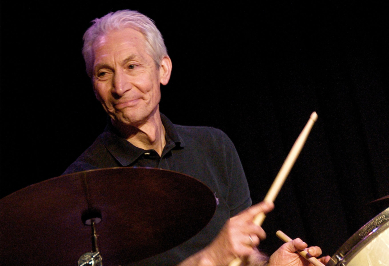 Charlie Watts, drummer of the Rolling Stones since 1963, passed away, at age 80, on Tuesday, August 24th. I am still sad and in shock.

I discovered the Rolling Stones when I was thirteen-years-old while packed in a minivan, with my family, driving through Memphis on our the way to Branson, Missouri, for a summer vacation. At that point in my life my musical habits were strictly devoted to Mozart and the Doors. I may not have to tell you this, but I wasn’t very thrilled about visiting the “Live Music Capital of the World”.

It was while passing the Memphis Pyramid that my uncle was surfing the radio for local traffic reports. He stopped on an oldies station. One song played off, a commercial aired and then I had something akin to a religious experience on the backseat of the van. The next song to blast from the speakers was “Paint It Black”.

I felt as though I was hearing music for the first time. The song gave me chills and I felt, in that moment, that it was the most rebellious, most primitive, thing I had ever heard. I still feel that way. I still get chills when I listen to it. Those drums…Charlie Watts could play.

From that moment in the minivan I have been a devoted Stones fan. After that family vacation ended, I bought my first Stones album– Flashpoint, a live LP culled from their ’89/’90 Steel Wheels/Urban Jungle world tours. I was a fanatic: I bought all their music, I read every article and book about the Stones, I watched whatever concert or video footage I could find of them. Seeing the Stones play live in 1997 at Vanderbilt Stadium ranks as a highlight in my life.

They are my family.

Charlie Watts was, and still is, my family.

And I thank him for all he’s given to me, to us, to the world– not just now, but forever and for all time.