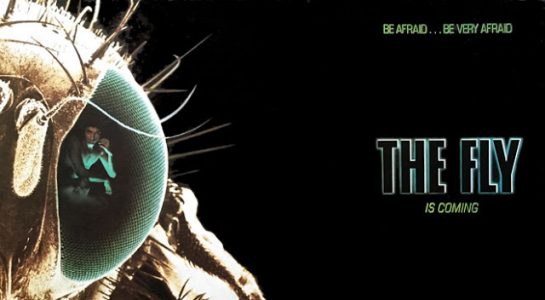 Based upon the 1957 short story of the same name by George Langelaan, The Fly was first adapted to the screen with horror icon Vincent Price in 1958.  It was then remade, with director and co-screenwriter David Cronenberg, in 1986.  I believe it is safe to say that to compare the two versions with each other would be like comparing Sesame Street to the HBO prison drama Oz.  While they are both educational, one is fairly innocuous while the other has the potential to seriously mess you up.  Just to be clear for the sake of this article, Sesame Street is the more innocuous.

Journalist Veronica Quaife (Geena Davis) meets Seth Brundle (Jeff Goldblum) at a scientific event they both find boring as balls.  Seth is a scientist and his personality veers more towards the quirky side.  Naturally, they hit it off immediately and the odd (not quite yet mad) scientist invites Veronica back to his place to show her something truly amazing.

At Seth’s home, which is a warehouse converted into a lab/living abode, he swears Veronica to secrecy and shows her his work which will revolutionize the world as we know it:  teleportation pods.  The pods work, but only on inanimate objects.  Whenever Seth tries to teleport a living organism, they teleport, but they don’t come out the second pod the way they went in the first one (there’s a poor, dead baboon turned inside out that could attest to the horrific nature of teleportation research).

Sensing the story of a lifetime, Veronica agrees to the nondisclosure for the rights to document and report Seth’s research.  The scientist and the journalist begin their collaboration, embarking not only on an adventure of scientific exploration, but they also give into the kindling fires of their own romance.

While Veronica is absent trying to stop her editor, also her former paramour, from publishing the story of the telepods prematurely, Seth decides to do what no man has done before.  Having successfully teleported a living baboon, he decides to enter the pods himself.

Seth teleports from one pod to the other and doesn’t exit with his guts on the outside.  That alone seems like the ultimate win.  Unbeknownst to Seth, a fly hitchhiked with him in the teleportation pods and, as they went from point A to point B, their DNA got separated, rearranged, and mixed back together as one.

For those who are unfamiliar with the work of David Cronenberg, especially his early work, he used to be really interested in the sub-genre of body horror, in how our own bodies can turn against us.  For those who have never seen Cronenberg’s version of The Fly, you’re gonna learn a lot about our friend the common housefly, and it’s not gonna be pretty.  In fact, there’s a good chance you may never look at those little bastards the same way again.

The more repulsive elements are actually integral to the story.  A lot of artists will go for the gross-out when they can’t generate the scares, but David Cronenberg has never had that problem.  There’s a reason this movie’s tagline was “Be afraid.  Be very afraid.”