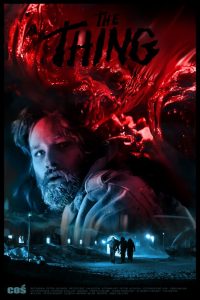 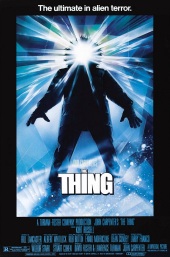 In my little lab space at work there is a wildlife calendar hanging on the wall.  So far this year I have seen an owl, a beaver, a moose, and a group of otters.  For the month of May, the wildlife picture is an octopus.  It took me by surprise.  There’s nothing really wrong with the picture of the octopus, it’s swimming nicely in tropical blue waters.  But octopuses freak me out.  Maybe it’s all those tentacles, or their squishy nature, but I’ve never liked them.  Watch them move on land, it’s weird.  Plus, those tentacles going everywhere.

Looking at this picture every day puts me in mind of The Thing, the other John Carpenter masterpiece besides Halloween and The Fog.  It’s all of those freaky-deaky tentacles.  Plus, the weather is warming up here in the South, and a snowbound film of ice cold terror and isolation is right on the money.

The movie begins with a Norwegian crewed helicopter chasing a Husky over the frozen landscape of Antarctica.  They shoot at the dog, they lob grenades at it.  To the point, they want to kill it good.

The chase leads them to an American research station where gunfire is exchanged and the helicopter explodes.  The Norwegians are dead, the dog survives, and the Americans want to know just what the hell all this craziness is about.

The dog is put in the pen with the Americans’ sled dogs and McReady (Kurt Russell) and the base doctor go investigate the Norwegian camp.  What they find is a whole lot of corpses, frozen blood, and evidence that the Norwegians discovered something buried in the ice.  McReady and the doc return to the research station with a corpse that looks kind of human.  The autopsy reveals some frightening information.

Meanwhile, in the kennel, the adopted Husky dog sort of bursts open and tries to absorb the other dogs.  The thing is an alien lifeform that was buried in the ice for a few hundred thousand years and it’s darn good at mimicry, right down to a person’s body odor.

So who is human and who is the thing?  No one knows, and that’s when the fun horror and paranoia begin.

Although it was dismissed upon it’s original release, over the years professional critics have reassessed The Thing to be what most of us already knew it was:  one of the greatest horror sci-fi films ever made.  Its goriness turned a lot of people off, and still does, I guess.  But, like a genuinely great scarefest, it doesn’t need the gross-out moments to frighten the viewer.  The atmosphere alone, the twisting screws of tension, do the most damage to your nerves.

The Thing doesn’t disturb me the way it did when I was a kid (it terrified the teetotal hell out of me at age twelve when I first saw it).  When I watch it now, though, as an adult, I can’t help but think of a quote from Joseph Heller’s novel Something Happened:  “In the office in which I work there are five people of whom I am afraid.”

We all have those coworkers who just aren’t right.  We have friends and family like that, too.  They seem normal enough, but you can’t quite pinpoint what may be off about them.  Who knows, they could be thinking the same thing about us.