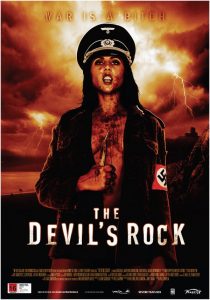 I have a soft spot for horror movies (and literature and video games) set during World War II.  Maybe the allure is the Nazis, the very epitome of evil, tinkering with forces best left alone and then receiving their grisly comeuppance.  It’s too good to miss.  I’m quite certain it originated with Raiders of the Lost Ark; when I was a kid, those melting faces scared the hell out of me.  Whatever the appeal, from 1981 onward I was interested in history and the macabre, and if those two things are mixed, as in the wonderful The Devil’s Rock, then bully for me.

On the eve of D-Day, the Allies send out small raiding parties to sabotage Nazi installations to draw their attention away from Normandy beach.  Two New Zealand soldiers, Capt. Grogan and Sgt. Tane, land on Forau Island, part of the Channel Islands, in the dead of night.  They make their way across an explosive filled beach to a Nazi bunker.  Their mission is to take out a German gun emplacement.

As Grogan is strapping a bomb to the cannon, they hear the screams of a man being tortured somewhere below in the underground bunker.  Before long they hear a woman screaming and a Nazi soldier staggers out begging for help.  If the bad guys need help, you kinda figure something is seriously wrong.

Venturing below, Grogan and Tane discover dead Nazis.  These Nazis haven’t just been murdered, though, they have been mutilated beyond recognizable form.  As Tane stumbles upon a book of what can best be described as arcane knowledge (the drawings of devils gives it away), he’s killed by a surviving German soldier, Col. Meyer, who looks to be on his last legs. 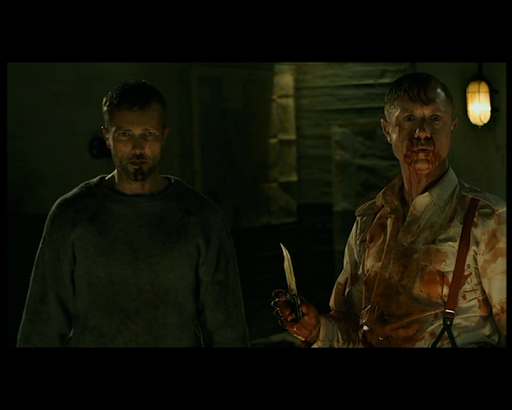 Grogan, upon discovering his comrade’s body, is incapacitated by Meyer in a sneak attack (dirty Nazi).  The colonel gives the Kiwi commando a little bit of the old torture routine, but he doesn’t kill him. The Nazi bad guy needs his help to stop what’s being held in the bowels of the bunker.

No surprise here, but Hitler’s henchmen have been scouring the globe for artifacts of supernatural means.  The book Tane found is one such object.  Meyer used it to raise a demon which promptly set about killing everybody.  The Germans finally chained it captive, but before Meyer could send it back to Hell, the darn thing either chewed up all his help or his help shot themselves to escape being chewed up.

So, Grogan is enlisted to assist the Nazi colonel.

One thing complicating the plan, the demon can assume different forms.  To Grogan, it looks like his deceased wife.  He eventually sees the demon’s true form, but when it switches back to a more desirable disguise, full of promises, Grogan’s flesh is weak though his spirit be willing.

This movie was made on a minimum of money, but you wouldn’t really know it.  It’s more or less a closed room horror story with great production design and performances all around.  It may not be wholly original, but it takes the familiar (who doesn’t like that comfort) and spins an enticing little tale.  The Devil do know to haggle (be it in Georgia or the Channel Islands).