There are certain films that only make sense in the late hours of the night.  Maybe, after midnight, we don’t need A to be followed logically by B. A so-called “midnight movie” could, justifiably, fall apart in the light of day when plots and actions, seemingly, have to be rational and reasonable, when we, the viewer, are thinking a little clearer.

Midnight Movie is such a film.  Possibly. I’ve never watched it in the daylight hours for fear its magic would be lost.  Sometimes the weirdest things are only understandable at two in the morning. Sometimes the most fun you can have is at the witching hour.

At the heart of Midnight Movie is a film-within-the-film, “The Dark Beneath.”  The director and star of “The Dark Beneath,” Ted Radford, was driven crazy by his motion picture.  Forty years in a mental ward has done him no favors. In a last ditch effort to help him, one of his doctors has poor Ted watch his film.  One doctor, Dr. Wayne, naturally objects.

Everybody in the hospital is brutally massacred (except for Dr. Wayne, he had other business to attend to).  At least, mass slaughter is what the evidence points to since there’s plenty of blood all over the place, but no bodies.  The only thing found, besides all that blood, is the film “The Dark Beneath.”

Another five years pass with no clues and no Ted.  Luckily, “The Dark Beneath” is being shown at a local theater (rundown doesn’t adequately describe it).  This will give Dr. Wayne and Detective Barrons, both of whom are still haunted by the case of the mental ward massacre and the disappearing psych patient, a chance to see if Ted resurfaces.  Their logic is that good old Ted will show up to see his cult masterpiece. When you think about it, after midnight, this is pretty sound logic.

The doctor and the detective join a few teenagers, theater staff, and a biker and his girlfriend to eat popcorn and watch a movie that’s as flat as a pancake cooked near a railroad trestle.  Ted, sadly, is a no show, but the skull-faced killer from “The Dark Beneath” jumps off the screen and raises all manner of hell. 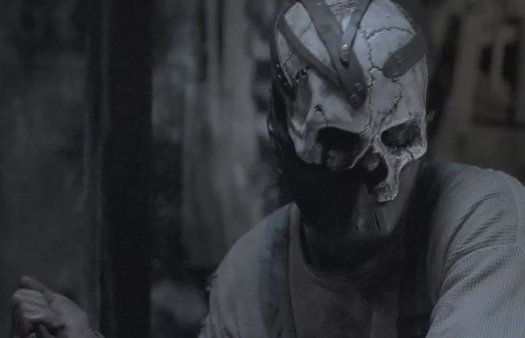 That’s where things get a little weird, in a good way.

The scared patrons soon discover there’s no escape: the doors won’t open and their cell phones won’t work.  As they run and try to hide in the dilapidated cinema, the killer pops up out of nowhere to snatch a victim and drag them to his workshop on-screen.  Everyone is helpless as they watch their friends and loved ones being massacred in vivid reality and glorious black and white.

Directed, and co-written, by Jack Messit, Midnight Movie is a hidden gem of a slasher.  It’s no Halloween or A Nightmare On Elm Street, but (and you can disagree with me all you want) it’s blood and blades above the original Friday the 13th.