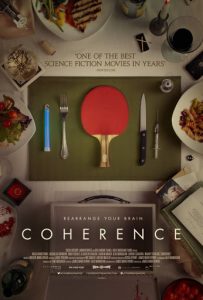 I like independent film. I like big Hollywood blowouts too, don’t get me wrong, but the independents, the low budgets, have a certain charm all their own.

One of the things I admire most about them is their ingenuity. Inspiration is very often spawned by desperation, and a shoestring budget. Not all independent film has it, mind you, but the better ones do. The independents don’t have two hundred million bucks to throw up on the screen. They can’t solve every problem with CGI and extensive reshoots (of course that doesn’t always solve the problems of the big films either). They have to rely on good old fashioned storytelling and moviemaking know-how, and they often have to think on their feet.

To my recent memory there is no better example of smart filmmaking and ingenious story chops than 2013’s Coherence. If movies were an IQ test, writer/director James Ward Byrkit and his cast and crew would hover at Einstein’s level. 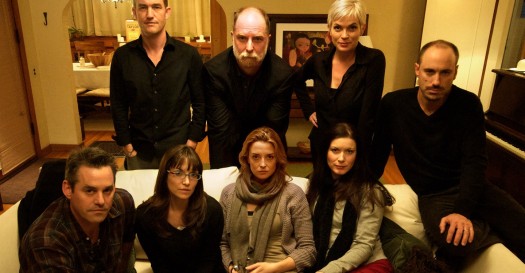 Coherence begins innocuously enough with an intimate dinner party. By coincidence, on this same night, a comet is passing overhead. The comet provides a topic of conversation of strange phenomena that transpired during other such heavenly events. A story is told of a woman who claimed her husband wasn’t her husband because she had killed him earlier. Talk about the perfect story for the perfect occasion.

Slowly, meticulously, the weird and unbelievable begin to emerge for the eight assembled guests. There’s a power outage, a mysterious knock at the “door to nowhere,” and a box arrives on the doorstep. Soon, friend turns against friend because they may not be the same friend they began the evening with or have known their entire lives. Secrets surface, both old and new, and the mystery of who is who tightens like an unrelenting vise.

In the middle of all of this is Emily (Emily Baldoni), a dancer whose career was once on the rise, but has now hit the skids. She is in a rocky relationship with Kevin (Maury Sterling) and, to add more trouble to Emily’s evening, Kevin’s ex-girlfriend, Laurie (Lauren Maher), is also attending the dinner. Emily and Laurie are polar opposites, Emily being the more reserved of the two and Laurie being everything Emily is not. It’s also bad juju that Laurie is looking to rekindle her old romance with Kevin.

With reality bleeding into reality, Emily sees a chance to have a life that is happier than her current one. For her to accomplish this end, she may have to commit some highly questionable means.

To follow the strands of Coherence is to follow a fascinating trail down a genuinely unsettling rabbit hole. From the opening to the final frame, the film possesses an ominous and eerie tone that feels as natural as the world we think we know.

Coherence earns multiple viewings. Each time I’ve watched it, I have gained a greater appreciation for it. It doesn’t demand understanding, it requires experiencing. To me, that is the hallmark not only of great science fiction, but of great film craft.