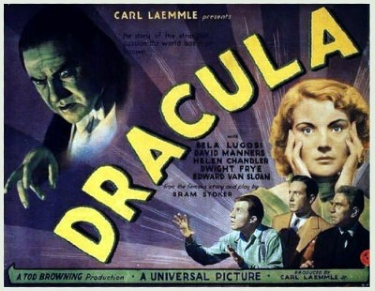 Hollywood has provided us with indelible images and iconic moments for over a century.  Whether it is Harold Lloyd hanging off the hands of a giant clock above a busy city street, a house falling down around Buster Keaton, Charlton Heston parting the Red Sea, or Charlie Chaplin eating a shoe, there are films and scenes we can isolate as turning points of innovation.  Although it has its faults, 1931’s Dracula, as directed by Tod Browning and starring Bela Lugosi, is the birthplace of modern horror cinema.

Dracula was a big deal when it was released.  It was a horror story based on a hit Broadway play that was based on a classic Victorian novel.  A major Hollywood studio was producing it.  If it had failed, we probably would not have Frankenstein, The Invisible Man, The Wolf Man and all the other Universal Monsters.  Without them, would there be Leatherface, Michael Myers, Jason Voorhees, Freddy Krueger?  What about Pumpkinhead?  How long would we have had to wait for Cenobites or Pennywise, the Dancing Clown?

True, there were horror films before Dracula.  The first ten horror films in recorded history were made and released from 1896 to 1899.  Once the Hollywood and global dream factories got going, we were given Nosferatu, The Phantom of the Opera, Häxan, The Cabinet of Dr. Caligari.  I’ll even throw in The Hunchback of Notre Dame and The Cat and the Canary.  These movies are iconic, to most horror and film fans anyway, but they still do not reach the heights of Bela Lugosi’s Count Dracula.

The image of Lugosi in costume is instantly recognizable.  People who have never seen the movie or read Bram Stoker’s novel know Bela Lugosi’s immortal Count.  The same cannot be said for Lon Chaney’s Phantom.  But, thanks to the horror hounds of the 1930s, Karloff’s Monster and Claude Rains’s Invisible Man receive nearly the same legendary status.  Lon Chaney, Jr.’s, Wolf Man, too.  And it’s all thanks to Dracula.

I’ll say to you what Henry the 8th said to all of his wives:  “I won’t keep you long.”  I’m not going to give you a rundown of what this movie is about, chances are you already know, even if you haven’t seen it.

It’s Halloween.  Our night has come around once more.  We have some tricks to do and some treats to receive.  I do have one small request to ask of you tonight, aside from staying safe…whatever little vampires you see, all the Draculas you encounter, give them a thank you from all of us.