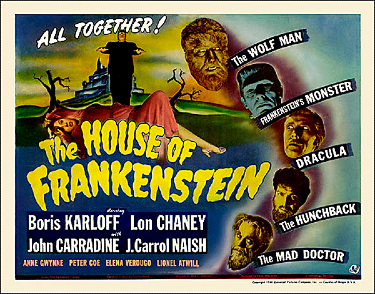 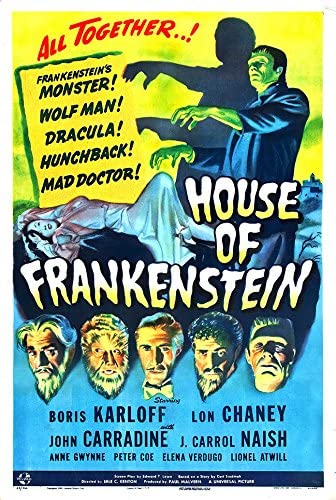 Thanks to a well-placed strike of lightning, Gustav Niemann no longer has to sit around, rotting away in prison.  The storm destroys the walls and he and his assistant, Daniel, a hunchback, make their escape.  Niemann, a scientist, was incarcerated because his experiments were considered crimes against humanity.  He and Daniel hightail it into the night with Niemann promising that their first order of business is to cure the deformities of Daniel’s body.

On the run, the two escapees provide help to Professor Lampini, owner of a travelling sideshow of oddities and curiosities.  His wagon is mired in the mud; after Niemann and Daniel push it free, Lampini offers them a ride.  Lampini is headed for a village where Burgomaster Hussman lives, the man who just so happened to imprison Dr. Niemann.

On the journey, Lampini reveals he has in his possession the actual remains of Count Dracula.  If one were to remove the stake from the corpse’s heart, the ancient vampire would return to life.  The gears begin to turn in Niemann’s head– he orders Daniel to kill Lampini in order to use the vampire to kill the burgomaster.

SPOILER ALERT:  The plan is executed exactly as Niemann intended, but with no further use for the vampire, the mad scientist has to dispose of him.  He does so by destroying Dracula’s coffin, thus leaving the Count with no place to rest once the sun rises.  One thing we’ve learned from history, vampires need the soil of their home and they have severe allergic reaction to sunlight.

But them’s the breaks.

Next, Niemann and Daniel scavenge among the ruins of Dr. Frankenstein’s old castle (the place gets as much foot traffic as Graceland).  Among the rubble, they discover not only the frozen body of the Monster, but that of Larry Talbot, flash-frozen as the Wolf Man.  Once they’re thawed, and Larry is back in human form, he begs Niemann to work on a cure for his inconvenient lycanthropy.  Niemann acquiesces, but he’s really too interested in studying Frankenstein’s Monster and unlocking the secrets of reanimating the dead than addressing werewolfism.

House of Frankenstein is well made.  Boris Karloff is genuinely sinister and insane as Gustav Niemann.  Lon Chaney, Jr., is great, as always, returning to the role of the Wolf Man.  Glenn Strange steps into the boots of the Frankenstein Monster for the first time (he’d play it twice more after this) and proves the best Monster outside of Karloff.  John Carradine is Dracula…maybe I’m not a John Carradine fan.  I was not sad to see the Count killed off so early.

The movie has a lot going for it, but none of it can really push it over the edge into greatness.  It’s a classic by default.  The best part of Frankenstein Meets the Wolf Man was Larry and Maleva’s road trip.  The best part of House of Frankenstein is Niemann and Daniel’s road trip.  All the Wolf Man and Monster trappings feel like they sideline what could have been a killer movie about a mad doctor and his assistant traversing the countryside on a terror spree to commit medical travesties.