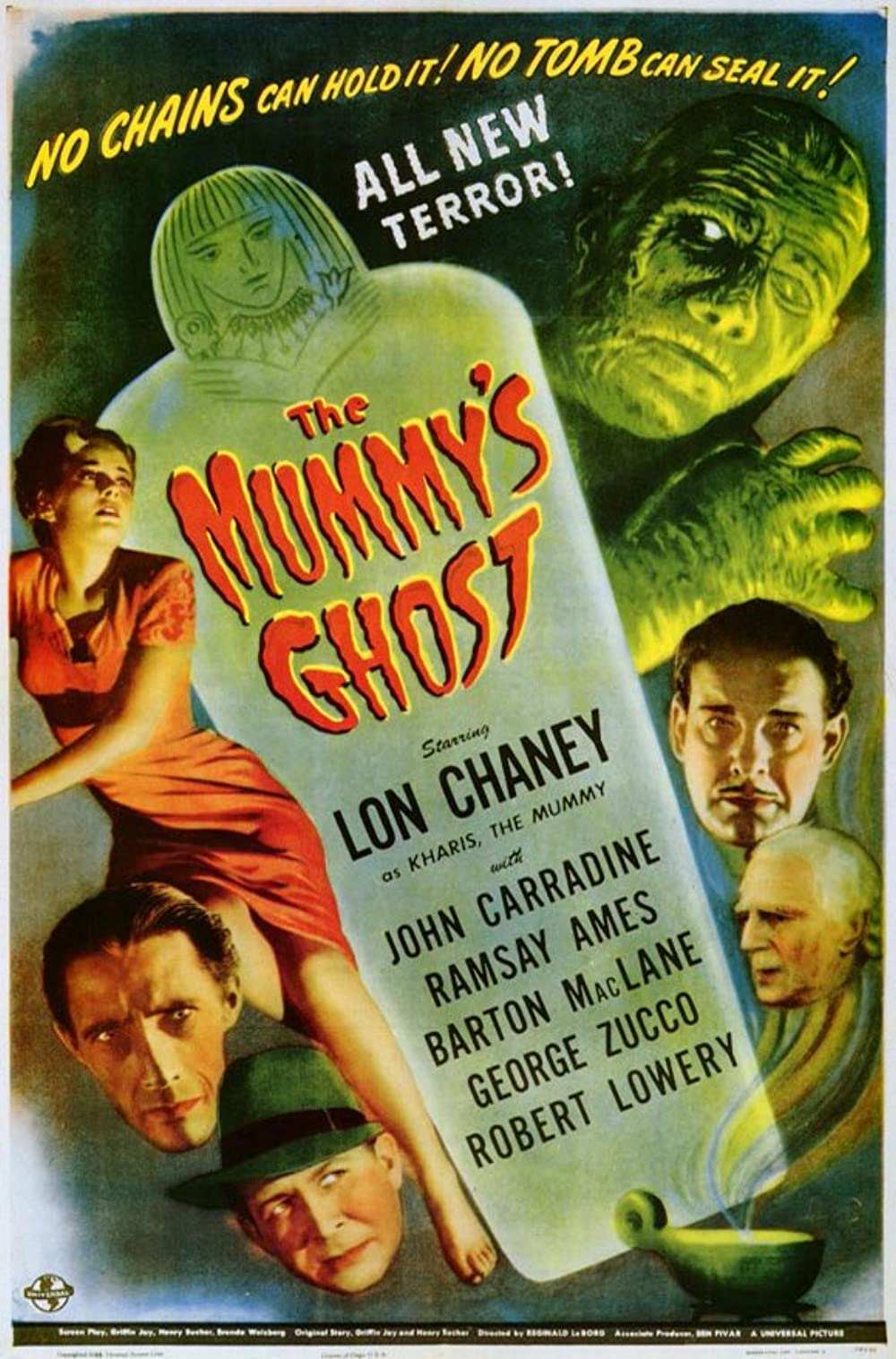 Andoheb, whom you may remember survived being gunned down in The Mummy’s Hand and died, again for the first time, I think (I honestly can’t remember by this point) after passing on the title of High Priest to Mehemet Bey in The Mummy’s Tomb, is back at it once more in The Mummy’s Ghost.  In the previous film, he charged Mehemet Bey with a mission of revenge on Steve Banning and his associates for desecrating Ananka’s tomb.  He used the mummy of Kharis to that end before being stopped.

In The Mummy’s Ghost, Andoheb charges Yousef Bey with returning to Mapleton, Massachusetts, where all the action took place last time, to retrieve the body of the Kharis, the mummy and that of the mummified Ananka who is on display in a museum there.  Andoheb gives him the tana leaves to achieve this new goal.  So, off to the United States for Bey.

In Mapleton, Professor Norman explains to his history majors a little about Ananka, her tomb, and the rampage of Kharis through their town some years before.  Most of the students find it hard to believe and think it was just someone dressed as a mummy causing all the troubles and doing all the murdering.  Norman knows different, he studied the evidence of the wrappings and the mold left at the crime scenes.

Student Tom Hervey doesn’t think much of the mummy, but he does love his girlfriend, Amina (who is of Egyptian descent).  Amina doesn’t mind the mummy tales and discussion of Egyptian history, but she sort of goes into a trance at the very mention of anything relating to Egypt and Egyptology.

Yousef Bey arrives and begins brewing the tana leaves (in this movie, the leaves only bring the Kharis to life during a full moon; coincidentally, Lon Chaney, Jr., plays the mummy).  Whenever, and wherever, the leaves are brewed (under a full moon), Kharis will seek them out.  Once he brews them, it’s not only Kharis who seeks out the leaves, but Amina, also.  Yousef soon finds out that Ananka’s body is in the museum, but her soul has been reincarnated in the form of the college student.

Once he discovers this, Bey doesn’t see why he can’t have Amina/Ananka all to himself.  Not only does Kharis, the mummy, not agree with this, but Amina’s boyfriend, Tom, doesn’t like it either.  Neither does Tom’s little dog.

The saving grace of The Mummy’s Ghost is its craziness.  It was odd to see Peter Lorre play Japanese in Invisible Agent, but to have John Carradine play an Egyptian…my apologies to Mr. Lorre.  If you want to see an entertaining bad movie, this is one to definitely check out.