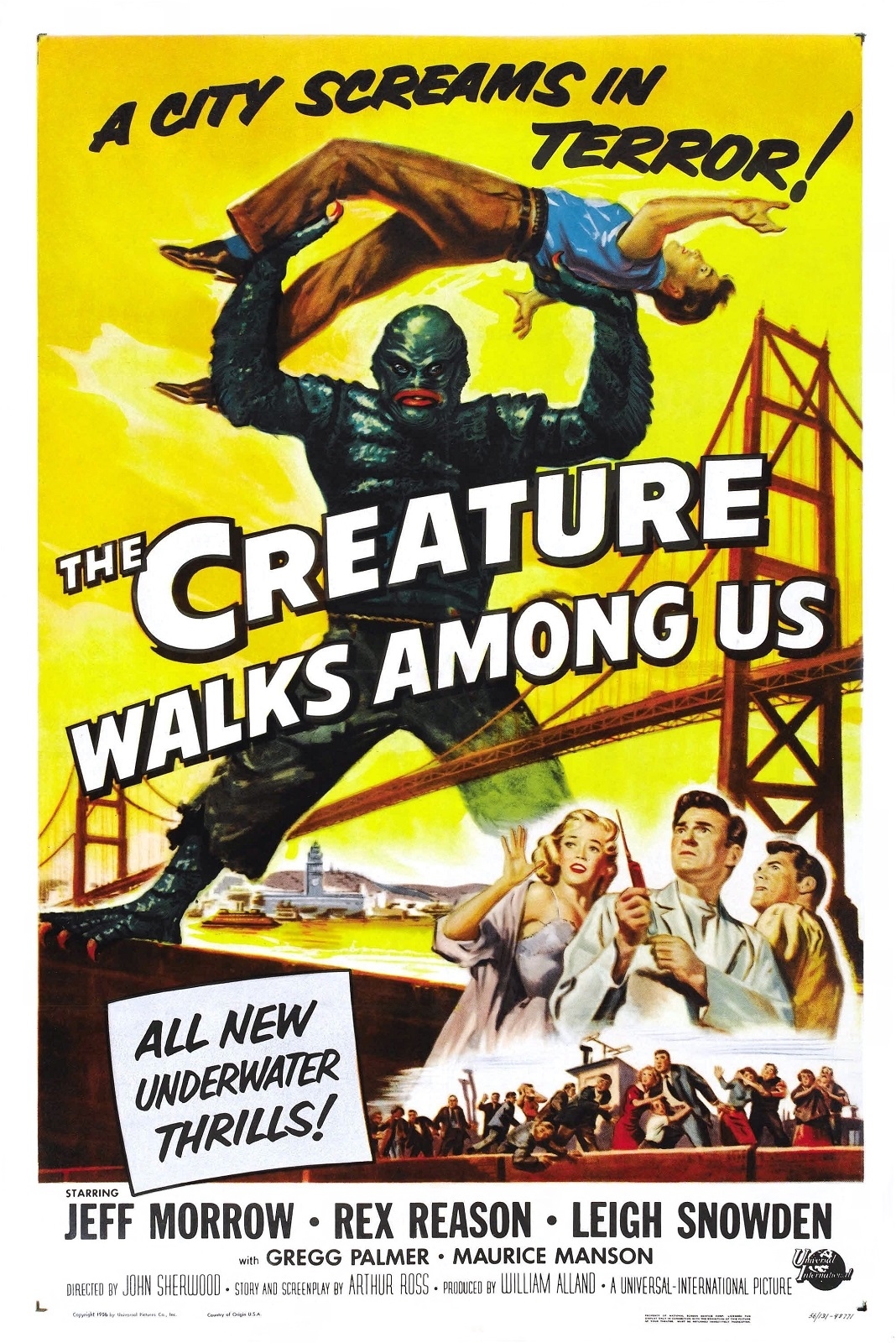 The last we saw Gill-man (in Revenge of the Creature), he was heading into the ocean on his way to freedom, otherwise known as the Florida Everglades.  Such a monster cannot be left to roam free, though. It must be captured in the name of public safety.  Science kinda needs him, too.

Doctor William Barton is tapped to assist in hunting the creature. His major, personal, drawbacks are that he is unstable of mind and abusive to his wife, Marcia (who drives their car as if she wants to kill them both). Barton insists Marcia accompany him on the quest to apprehend the monster. Having her there doesn’t help Barton much as he thinks every man wants his wife and vice versa. Sure, expedition guide Jed is quite the flirt, but Marcia isn’t having any of it. Barton’s suspicious mind goes into overdrive since Marcia doesn’t mind the attention of Dr. Morgan.

This being a Gill-man movie, you probably think the creature is gonna have the hots for Marcia, too. Well, guess what? You’re right. The creature has a type and it is human women.

The creature proves elusive even with the group’s tracking technology. After a first failed attempt, Gill-man tracks them, leaving the scientists and ship’s crew on edge about his eventual attack. The educated adventurers refuse to be victims and go on the offensive. This showdown finds the Gill-man speared and accidentally set on fire. Finally rendered unconscious, he’s caught.

The doctors work to treat the creature (the third degree burns were their fault after all). As they race to save his life, they learn he wasn’t made to live on land. Gill-man has lungs but he doesn’t use them as his primary source of oxygen. The doctors get the monster’s lungs to working and this starts the creature on a course of evolving beyond his Gill-man form.

Yep, breathing with the ol’ lungs has the creature becoming more human.

Back on land, Gill-man is moved to a secure location. He is given clothes to wear to go along with his changed appearance. Don’t worry, he doesn’t look human, but he doesn’t look like the original Gill-man either. He’s bulked up like a gangland bouncer from a noir film— he actually reminded me of Grey Hulk/Joe Fixit. Gill-man is also a lot more docile, just don’t piss him off. And definitely don’t attack women or goats.

The Creature Walks Among Us is as loony as Dr. Barton. It’s got some very serious things going on (like domestic violence and misogyny) and some really goofy things (like Joe Fixit Gill-man and its “science”). The ‘50s, am I right?

This ain’t the original Gill-man by any means (the underwater photography still remains on point), but it has its own kind of charm. Compared to the previous Revenge entry, this one is a tad more interesting.