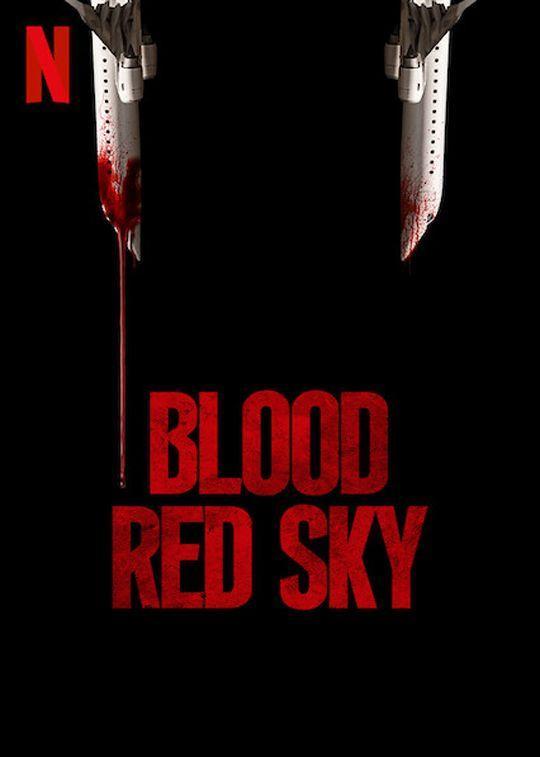 Commercial air transportation can be a hassle– checking luggage, carry-ons, delayed departures, cancelled flights, people.  Then, once you board, there’s no telling who you may be seated beside and do airlines really think that the seats recline that much?  For the poor souls in Blood Red Sky, they not only have to deal with all of that, but they have highjackers planning to kill them and also a vampire infestation.

Nadja and her young son, Elias, board a flight out of Germany bound for the United States. She has a rare disease, which most assume to be leukemia, and her medicine makes her just as sick as the disease itself. Doctors in the States have developed a treatment they think will help her, maybe even cure her. Another affliction of the disease is sensitivity to sunlight (wink, wink), so they must travel at night.

So far, so good. The plane is on time and in the air without and everybody settles in for lengthy transatlantic flight. Sadly, a few of their fellow passengers have a different plan. The co-pilot and the new male flight attendant are in on the highjacking. In fact, of all the men taking over the plane, the flight attendant is a complete psycho who seems to get his jollies killing people. When they round up the air marshals, he relishes the killings. He’s thirstier for blood than a vampire.

Nadja– you guessed it, she’s a vampire. Once the highjackers take over and redirect the plane to England, Elias, who has full knowledge of his mother’s condition, tries to get her to sneak away to hide in the lower hold of the airliner so she will not be caught in the daylight. When she declines to keep him safe, Elias darts for the hold. Nadja goes to stop him, but she is spotted by the crazed flight attendant-highjacker. He shoots her dead.

Naturally, she’s not dead. Not dead, but still undead. Or not living in the human sense…you know how it is with vampires. With the highjackers believing her dead (no reason why they wouldn’t with her having been pumped full of hot lead), it’s up to her to save her son and the rest of the passengers by using her vampire abilities.

Vampires on a plane may seem like a jolly stupid idea, but it’s actually a downright serious affair (Flight of the Living Dead it is not). Blood Red Sky is quite grim and coated with buckets of blood. I really enjoyed that it didn’t create things to pad out the runtime; every scene felt needed and worked and the movie unfolded at its own pace. This is one of the best original vampire movies since Near Dark.