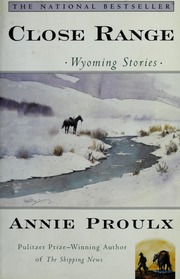 I’ve been reading quite a few short stories lately. One of the more interesting, and entertaining, ones I read was Annie Proulx’s “The Blood Bay” from her 1999 collection, Close Range: Wyoming Stories.

Proulx is best known for her Pulitzer Prize-winning novel, The Shipping News, and for “Brokeback Mountain”, which can be found in Close Range. I’ve not read that story yet, it’s the final one in this collection and I’ve only read the first four, of which “The Blood Bay” was the last.

“The Half-Skinned Steer”, “The Mud Below”, and “Job History” were excellent, and each different than the tale which preceded it. They were rather stark and gritty with mild flourishes of humor, but dramatic overall. They were serious stories.

“The Blood Bay” is different. It’s a comical yarn of a cowboy who dies on the range during a particularly brutal Wyoming winter. Three other cowboys happen by his frozen corpse and one of them, in need of boots, sees the dead man has the same boot size as him. The dead cowboy won’t be needing his boots as much as the living one, so some boot theft is decided.

The problem in taking the boots is that they are frozen to the dead man’s feet. So, the stranger cuts the dead man’s legs off right above the boots. When he and his travelling companions seek shelter from the blizzard at an old coot’s farm, the cowboy sets the boots (with feet still frozen in them) behind the stove to thaw overnight.

None of that screams comedy, or doesn’t scream it loudly anyway, but it’s a brilliant setup once you learn about the cantankerous horse of the title and the events which follow. I cannot tell you anything further because it would ruin this most perfect story. I laughed, and I think you will, too.