I like movies and literature from bygone eras, and there’s something about the 1970s which fascinates me.  I was born in the latter part of that particular decade and that ends my intimate connection to it.  I have a fascination with most time periods other than my own, and films and books provide a cheap means of time travel.  I’m weird like that, maybe.

Columbo is one of my favorite TV shows.  ‘Salem’s Lot is one of my favorite novels (don’t get me started on the original miniseries, it’s classic).   I love music from the seventies; the Stones’ winning streak from the ‘Me’ decade is unprecedented (I’m a Rolling Stones fan, get over it).  And comic books from the seventies?  Well, I’m all up in that stuff, especially if they are obscure.  Or, at least, obscure to me.  When I found Night Nurse over at Marvel Unlimited, I knew I had struck gold. 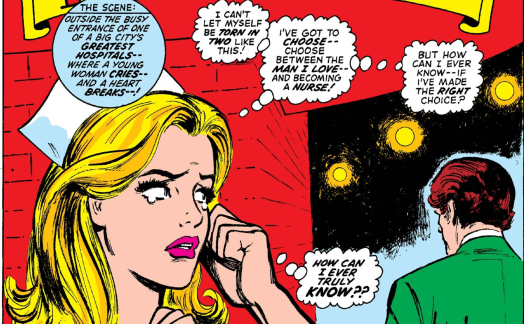 Night Nurse followed Linda Carter (the one identified as the title character), Georgia Jenkins, and Christine Palmer as they trained to enter the medical profession at New York City’s (fictional) Metropolitan General Hospital.  Linda is the daughter of a doctor, Georgia is from the inner-city, and Christine is a rich girl trying to make it on her won without her daddy’s money.

As is customary in melodrama (and comics, decide the difference), the three did not initially gel well.  Do not fear, they overcome their differences halfway through the first issue and go on to have  all the  “danger, drama, and death”-filled medical adventures a four-issue run allots.  To be fully transparent, I have not read all four issues, only the first one.  I do plan to read the remaining three.

From the cover alone, it’s easy to see Night Nurse is a product of its time.  It is cringe-worthy in several places.  Women wrote it, but a man was the editor.  Also, you know, things were really different back when.  Still, I thought it was an interesting read, it does the job of passing the time in an entertaining way.  Plus, it has those flashes of 1970’s grooviness.  Dig it.

From what I’ve read elsewhere, Linda Carter, in this century, is a medical professional to the superhero community.  Good for her, and the Marvel Universe (Rachel McAdams played Christine Palmer in the Doctor Strange movie).  Personally, I’d love to see a Night Nurse series on Disney+ which follows Linda, Georgia, and Christine as they navigate the tricky courses of medicine in a pandemic world.  Night Nurses–they are heroes whose time has come, and whose spotlight is long overdue.