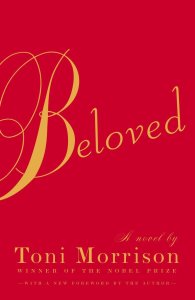 In the years following the Civil War, Sethe has made a home for herself at 124 Bluestone Road.  It is the former home of her late mother-in-law, Baby Suggs, and she occupies the house with her eighteen-year-old daughter, Denver, and the ghost of her infant child whose tombstone is inscribed with only the name, Beloved.

Sethe is a former slave.  Her husband, Halle, worked to buy his mother’s freedom.  They were captive at the plantation known as Sweet Home, owned by the Garners.  Life was far from perfect, but Mr. Garner treated his slaves a little better than other slave-owners.  After his death, Mrs. Garner hired the foreman known as schoolteacher to run the plantation, and it was under his rule graver mistreatment began.

After Halle bought his mother’s freedom, Baby Suggs moved to Ohio to the house on Bluestone Road.  When schoolteacher’s abuses and governing became even more miserable, and with Mrs. Garner at death’s door, Sethe and Halle plan an escape with Paul D and others.  Things did not go as planned.

Looking to join her children, toddlers Howard and Buglar and the infant, Beloved, already with Baby Suggs, the pregnant Sethe escapes.  Alone and bursting with child, she is aided by a white girl named Amy Denver, who helps Sethe deliver her baby.  Liking the sound of the name, and thankful for her kindness, Sethe names her daughter after the girl.

Sethe makes it to Baby Suggs’ house which acts as a community gathering spot.  Sethe is reunited with her children, but her husband, Halle, never arrives, leaving them all to assume the worst.  The brief breathing room the house on Bluestone Road provides is shattered when schoolteacher rides down the road to reclaim the runaways.  This leads to a horrific event that will scar Sethe, turn the community against her, and haunt Baby Suggs to her grave.

When they are old enough, Howard and Buglar leave home never to return.  Sethe and Denver believe it is the presence which haunts the house that drove the boys off, the ghost they believe to be that of Beloved.  The ghost is only, seemingly, exorcised once Paul D arrives at 124.  After all these years, his love and longing for Sethe brings her the hope for a new start.

Sethe and Paul D’s romance is kindling, and Denver isn’t too pleased with it.  She feels like a third wheel pushed to the side until another, stranger, visitor arrives on their doorstep.

Returning from the fair one evening, they find a young woman, not much older than Denver, lying famished on the front lawn and drenched, having just come up from the water.  This young woman is simple in speech and action, and goes by the name of Beloved.  She has an instant connection with Denver and infatuation with Sethe.  Paul D is suspicious and their relationship is tense.

Beloved is a ghost story told in shifts of time and perspective.  It has hauntings both spiritual and psychological; it is about haunted places and badly haunted people.  Toni Morrison’s lyrical prose makes the horrors more real and more disturbing because you just can’t put it down even when it turns your stomach or breaks your heart.