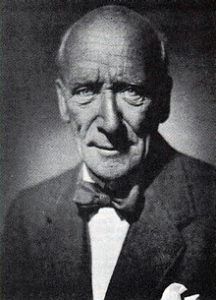 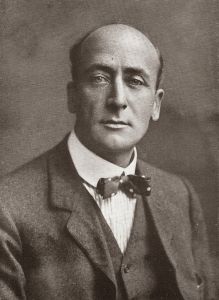 Algernon Blackwood had a long list of jobs, including dairy farmer, journalist, model, and bartender.  He is most remembered as a writer of some great ghost stories.  Scholar S.T. Joshi has stated that Blackwood’s collection, Incredible Adventures, “may be the premier weird collection of this or any other century”.

Blackwood’s life, itself, was the stuff of fine adventure yarns.  He lived for a time in the Canadian backwoods before moving to New York City, to which he was ill-suited.  One contributing factor for his discomfort was almost being framed for arson.  He was also robbed by someone he trusted and thought to be a friend.

It wasn’t until he returned to his native England, in about 1900, that he began to write, and then only after joining the Hermetic Order of the Golden Dawn (Arthur Machen was a fellow member). Additionally, Blackwood was a member of The Ghost Club (which, still in existence, has been investigating the paranormal since 1862).

The Empty House and Other Ghost Stories was published in 1906, but it wasn’t until his creation of John Silence, a psychic detective, that Blackwood found measurable success. At the outbreak of World War I, he served with British military intelligence. After the war, he resumed his life and writing where he had previously left off.

Although he is known as the author of the widely read “The Willows” (a favorite of H.P. Lovecraft) and “The Wendigo” (probably the most famous of his works), Algernon Blackwood’s greatest popularity, in his later lifetime, came from reading ghost stories on the radio. He first read on BBC radio in 1936 and was so successful as to be dubbed the Ghost Man by avid listeners.

Suggested reading: “The Wendigo”, naturally. Set in the wilds of Canada, it depicts a hunting trip that goes as horribly wrong as one can. The hunters are not alone in the woods, and when one of them, crazed with fear, vanishes in the night, two sets of footprints are discovered: the missing hunter’s and those of something not human.

“The Willows” is also a no-brainer to suggest, so I feel I must. It concerns two men canoeing down the Danube when the wilderness, and the surrounding world, turns violent against them. Yet, there may be something other at work.

And, lastly, may I also suggest The Complete Works of Algernon Blackwood.