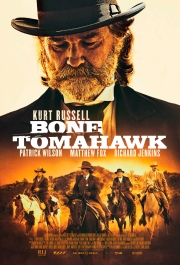 Do any children still play cowboys and Indians?  My child does not (or hasn’t in many moons), but I sure did when I was in short pants.  I was either the Lone Ranger or James West.  Upon learning that my maternal great-great-grandmother had been full-blooded Cherokee, I switched sides and did my best to negotiate peace between the warring factions of Native Americans and pale faces.

Westerns were a big part of my childhood.  When VCRs were the newest craze, my Uncle Calvin had one and frequented our town’s first video store, Video Corner.  He rented out every cowboy movie available, a lot of them multiple times.  Bone Tomahawk would not have been a movie he would have rented a second time.  My uncle and I differed in some film choices.

Bone Tomahawk begins when two bandits murder a group of travelers and run to the hills when spooked by the approach of more people.  The murderers, Purvis (David Arquette) and Buddy (Sid Haig), disturb a very creepy burial site and are quickly set upon by a tribe of Native Americans who don’t play around.

Purvis escapes, barely, and finds himself in a nearby town where he is apprehended by the sheriff (Kurt Russell) who wounds Purvis in the leg.  Long story short, during the night, members of the Native American tribe kidnap Purvis and Samantha (Lili Simmons), the doctor’s assistant, who was tending to the criminal’s injuries.

The sheriff organizes a posse consisting of himself, his deputy Chicory (Richard Jenkins), gentleman gunslinger John Brooder (Matthew Fox), and Samantha’s husband Arthur (Patrick Wilson), who has a broken leg.  Before they begin their hunt, they learn from a local expert, upon examination of an arrow left by the kidnappers, that this particular tribe are cannibals from an area known as the “Valley of the Starving Men.” All of that aside, Arthur is determined to save his wife, man-eaters and bone fractures be damned.

This much of the story may be reminiscent of The Searchers, or any number of Saturday matinee cowboy flicks.  John Wayne, Roy Rogers, and even Lash LaRue, though, to my knowledge, never had to worry about the enemy eating them, be they served raw, roasted or fricasseed.

The journey to the Valley of the Starving Men is fraught with peril.  Dealing with cannibals is something rather new for the members of the posse and they have to form a game plan.  They also must deal with infighting as much as fending off bandits wanting to take their lives, supplies, and boots.

This is a real feeling western, even when it gets particularly gruesome in the last twenty to thirty minutes.  It’s grounded by stellar performances from all of the cast, especially Kurt Russell and Matthew Fox, whose gunslinger steals every scene (he really deserves his own movie).

This isn’t your grandpa’s western, or my uncle’s.  Genre mash-ups are hit or miss with most, usually, falling into the latter category.  With so many valiant (but ultimately failed) attempts to cross the finish line in decent form (such as Cowboys & Aliens), it’s a relief to see a winner come riding in off the lonesome plains.